Volendam - Fishermen Village in The Netherlands 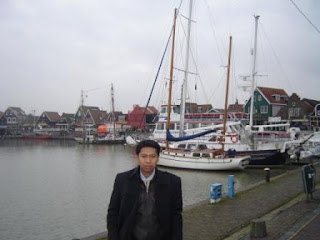 Volendam is a fishermen village in the Netherlands, located about one hour from Amsterdam by car.

Originally, Volendam was the location of the harbor of the nearby Edam, which was situated at the mouth of the river IJ. In 1357, the inhabitants of Edam dug a shorter canal to the Zuiderzee with its own separate harbor. This removed the need for the original harbor, which was then dammed and used for land reclamation. Farmers and local fishermen settled there, forming the new community of Vollendam, which literally meant something like 'Filled dam'.


In the early part of the 20th century it became something of an artists' retreat, with both Picasso and Renoir spending time here. The majority of the population belongs to the Roman Catholic Church, which is deeply connected to the village culture. Historically, many missionaries and bishops grew up in Volendam. Today there is the chapel of Our Lady of the Water of the visionary Mrs Hille Kok, which is located in a village park.

Volendam is a popular tourist attraction in the Netherlands, well-known for its old fishing boats and the traditional clothing still worn by some residents. The women's costume of Volendam, with its high, pointed bonnet, is one of the most recognizable of the Dutch traditional costumes, and is often featured on tourist postcards and posters (although there are believed to be fewer than 50 women now wearing the costume as part of their daily lives, most of them elderly).

There is a regular ferry connection to Marken, a peninsula close by. Volendam also features a small museum about its history and clothing style, and visitors can have their pictures taken in traditional Dutch costumes.
Volendam