Bali - Island of the Gods 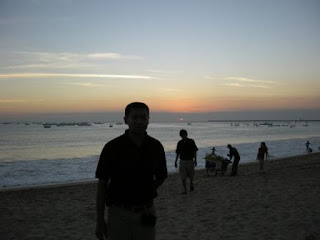 Bali, the fabled "Island of the Gods", has been enchanting visitors for centuries with its rich cultural traditions and spectacular panoramas. From lofty, mist enshrouded volcanoes and cool mountain lakes down through terraced rice fields to a golden strand lapped by azure waters, every square inch of Bali offers a fresh and unforgettable image.

No less enchanting are its people, some 2.7 million souls whose artistry and piety are recognized throughout the world Balinese Hinduism, a complex fusion of Indian cosmology. Tantric Buddhism and homegrown mythology, is the primary faith of Bali's inhabitants, and so deeply woven into the fabric of their daily lives that the line between the spiritual and the material is blurry at best.


Those of you keen on delving into the island's fascinating culture will have plenty of opportunities, as colorful ceremonies and traditional performance occur with regularity of sunrise. Most hotels offer nightly dance shows of one form or another, tailored to tourist audiences but none the less exquisite. The hill town of Ubud, the island's premier arts center, also has a full schedule of performance, and the nearby stone-cutter's village of Batubulan is famed for its Barong lion dances.

The shoppers among you will find Bali a treasure house of handicraft and fine work of art. The Balinese are incredibly gifted artists and craftsmen, and their material creation are imbued with the same sense of wonderment with which they regard their universe. Stone and wood carvings, traditional and modern paintings and intricately designed jewelry in gold and silver are readily in shops and galleries throughout the island.

As for recreation, there is no shortage of option. Nature walks, horseback riding, diving, surving - even bungy jumping and white water rafting - await the adventurous here.

Places of interest in Bali:
Batur Caldera
The enormous crater basin of Batur is a spectacular sight. Dominating its centre is Mt. Batur, a brooding blackened cone that erupted four times last century. Six small village eke out an existence within the walls of the caldera, peopled by a simple mountain folk known A Bali Aga ("original Balinese")

Bedugul
The cool highland resort of Bedugul on the shores of Lake Bratan has become a popular retreat for tourists and residents alike.

Besakih
Bali's "Mother Temple" is a sprawling complex of shrines and pavilion set high on the slopes of sacred Mt. Agung.

Goa Gajah
The ancient hermitage of Goa Gajah (Elephant Cave) near Bedulu is one of Bali's most intriguing archeological sites, comprising a man made Buddhist Stupa.

Jimbaran
Jimbaran lies on the 'neck' of the southern peninsula in Bali and is widely known for the fresh seafood kiosks that are scattered along the beach. Diners select the live seafood that they wish to eat, and it is immediately prepared, generally grilled over a fire of coconut husks rather than charcoal.

Kerta Gosa
The Kerta Gosa Hall of Justice is a small pavilion adorned with fantastic ceiling murals. In the 18th century it was Bali's highest court of law.

Kuta
Kuta Bay, with its long stretch of white sand and brilliant sunset, has attracted swarms of visitors since its rediscovery by surfers and sun worshippers in the 1970s.

Sangeh Monkey Forest
Populated by a large troupe of monkeys, this thick stand of nutmeg trees is believed by legend to have fallen out of the sky during a mythic battle between the gods, carrying with it battalion of Wisnu's monkey army.

Sanur
The resort area of Sanur has grown up around Bali's largest traditional village and today boasts excellent facilities for the international visitor.

Tanah Lot
Tanah Lot (Earth from the Sea) is a stunning 15th century sanctuary located on Bali's south coast, built atop a rocky mound that at high tide is completely surrounded by water.

Tulamben
Some of Bali's most interesting diving is found at Tulamben, where the shallow wreck of a WWII US cargo ship is now festooned with colorful corals and schools of tropical fish.[Garuda Indonesia]
Bali