The Beauty of Esplanade - Theaters on the Bay Singapore at Night 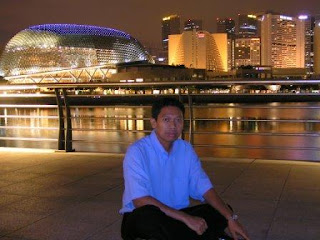 Esplanade - Theaters on the Bay is very beautiful views at night. Shaped like half a durian fruit. Esplanade is located in between Raffles Avenue and Esplanade Drive, precisely at the edge of Marina Bay at the mouth of the Singapore River.

Esplanade - Theaters on the Bay is one of the busiest arts center in the world, officially opened on October 12, 2002.

In the year 1992, selected a team consisting of well-known local company DP Architects (Singapore) and Michael Wilford & Partners (UK) to start the construction work is art center. To maintain the link between past and present, this arts center finally called the Esplanade - Theaters on the Bay.

Esplanade comprises two large rooms: a theater with 2,000 seats and the Concert Hall with 1600 seats, and equipped with two smaller studios, an outdoor theater and a mall. Two dome that became the location of Theater and Concert Hall is designed with the glass material, to give the impression open. Art center to remain cool in tropical temperatures, more than 7,000 pieces of the sun visor with aluminum framework coated cover double glazing installed in order to form a steel support that made the cover art center is a stunning architectural icon, in front of the horizon of Singapore. Thorn-shaped cover that eventually became the name of a popular title on the basis of local favorite fruit, Durian.

Esplanade aims to be a performing arts center for all circles, and programs to reach a wide range of audiences. Composition of the program covers all genres, including music, dance, theater and visual arts, with special focus on Asian culture.
Singapore