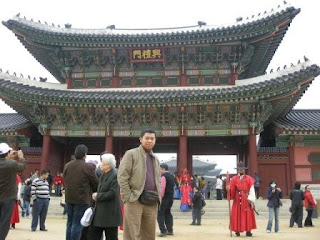 The palace was originally constructed in 1394 by King Taejo and "Gyeongbokgung" was named by minister Jeong Do-jeon. Gyeongbokgung was continuously expanded during the reign of King Taejong and King Sejong the Great, but part of the palace was burnt down during Japanese invasions of Korea (1592-1598).

During the regency of Daewon-gun in 1867, the buildings were reconstructed and formed a massive 330 building complex with 5,792 rooms. Standing on 4,414,000 square feet (410,000 square meters) of land, it was a symbol of majesty for the Korean people and the home of the royal family. In 1895, after the assassination of Empress Myeongseong by Japanese agents, her husband, Emperor Gojong left the palace and the imperial family would never return.


In 1911, the government of Japan demolished all but 10 building during the period of Japanese occupation, constructing the Japanese General Government Building for the Governor-General of Korea in front of the throne hall. Oddly, the Japanese took many pictures of poverty in Korea, but did not take a single photo of this historic site.