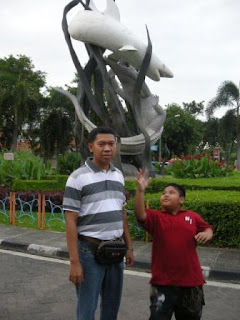 Surabaya provincial capital of East Java and Indonesia's second-largest city, served for over half of a millennium as trading port for the inland empires of Java.

Situated at the mouth of the Brantas River, the city was officially founded in 1293 when Raden Widjaja established Majapahit, Indonesia's most glorious empire on the site of legendary battle between a shark (sura) and crocodile (baya).


Surabaya, known as the "city of Heroes" because of its role in the nation's independence struggle, has grown into elegant city of large, colonnaded buildings bordering broad, tree shaded avenues.

It serves as the commercial center of a thriving industrial and agricultural hinterland.

The city's historical sites include Kali Mas harbor with its tall-masted trading schooners and, nearby, the narrow alleyways and shops of Arab quarter, redolent of the Middle East. The historic Hotel Majapahit, where Indonesia's war of independence was begun, and the elegant Grahadi State Buildings, an 18th century mansion, have been restored as monument to an era of colonial grace.

Surabaya is also home to one of southest Asia's oldest and largest zoos.[ref. Garuda Indonesia]
Surabaya