Amsterdam Arena - The Home of The AFC Ajax 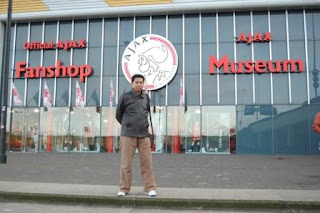 While in Amsterdam, we took time to visit the Amsterdam Arena. The stadium is the home of the association football club AFC Ajax (1996–present). According to Wikipedia, Ajax is historically one of the most successful clubs of the world; according to the IFFHS, Ajax were the seventh most successful European club of the 20th century.

Ajax's last international trophies were the 1995 Intercontinental Cup and the 1995 Champions League, where they defeated Milan in the final; they lost the 1996 Champions League final on penalties to Juventus. 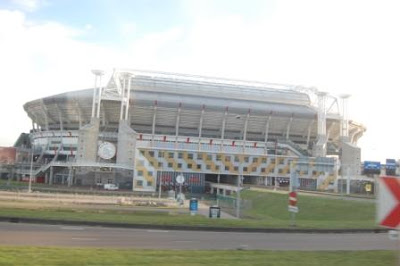 They are also one of three teams to win the treble and the Intercontinental Cup in the same season/calendar year; This was achieved in the 1971-72 season. Ajax, Juventus and Bayern Munich are the three clubs to have won all three major UEFA club competitions. They have also won the Intercontinental Cup twice, the 1991–92 UEFA Cup, as well as the Karl Rappan Cup, a predecessor of the UEFA Intertoto Cup in 1962.

Back to Amsterdam Arena. The stadium was built from 1993 to 1996 at a cost of €140 million, and was officially opened on 14 August 1996. It has been used for association football, American football, concerts, and other events.

The stadium has a retractable roof combined with a grass surface. It has a capacity of 51,715 seats during sports matches and 68,000 places during concerts if a center-stage setup is used (the stage in the middle of the pitch); for end-stage concerts, the capacity is 50,000, and for concerts where the stage is located in the east side of the stadium, the capacity is 35,000.
Amsterdam