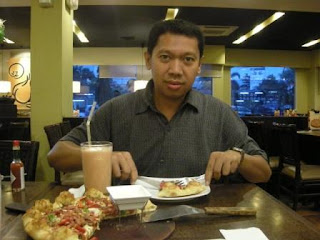 That afternoon, my wife took me to eat pizza hut. We've enjoyed eating pizza, almost all the malls in Surabaya which is restorant pizza, we've visited. Among others in Tunjungan Plaza, Pakuwon Super Mall, and Galaxi Mall.

In addition to the Mall, Pizza Hut also opened outlets in Jalan Darmo Surabaya and Jemur Sari. More comfortable to eat at both places. That afternoon, we chose to eat at Pizza Hut Jemur Sari.

History of Pizza
According to Wikipedia, the origin of the word "pizza" is unclear, but by 997 it had appeared in Medieval Latin, and in 16th century Naples a galette flatbread was referred to as a pizza.

The pizza was a baker's tool: a dough used to verify the temperature of the oven.[citation needed] A dish of the poor people, it was sold in the street and was not considered a kitchen recipe for a long time.

Before the 17th century, the pizza was covered with white sauce.This was later replaced by oil, cheese, tomatoes or fish. In 1843, Alexandre Dumas, père described the diversity of pizza toppings.

In June 1889, to honor the Queen consort of Italy, Margherita of Savoy, the Neapolitan chef Raffaele Esposito created the "Pizza Margherita," a pizza garnished with tomatoes, mozzarella cheese, and basil, to represent the colors of the Italian flag. He was the first to add cheese.

The sequence through which flavored flatbreads of the ancient and medieval Mediterranean became the dish popularized in the 20th century is not fully understood.
Surabaya