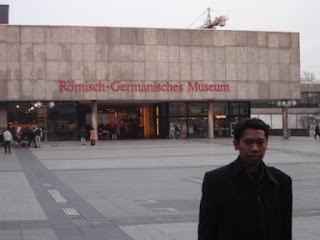 On the way from Amsterdam to Paris, we stopped in Cologne. One that will be seen in Cologne is the Roman-Germanic Museum (RGM), in Germany: Römisch-Germanisches Museum.

The museum was opened in 1974, is located adjacent to the Cologne Cathedral. It has a large collection of Roman artifacts from the Roman settlement Colonia Claudia Ara Agrippinensium, on which modern Cologne is built.

According to Wikipedia. The museum protects the original place of a Roman town villa, of which the large Dionysus Mosaic remains in its original place in the basement now, and the related Roman Road just outside. In this respect the museum is an archaeological site.

The museum also is the institution to preserve the Cologne Roman cultural heritage, and therefore preserves wonderful Roman glass from Roman funerals and burial. This archaeological function also includes the supervision of the Cologne underground, which is now under construction.
Cologne