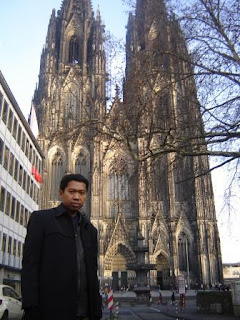 Near Romano-Germanic Museum, there is the Gothic church of Cologne Cathedral. According to Wikipedia, Cologne Cathedral (German: Kölner Dom, officially Hohe Domkirche St. Peter und Maria) is a Roman Catholic church in Cologne, Germany. It is the seat of the Archbishop of Cologne (currently Cardinal Joachim Meisner), and is under the administration of the archdiocese of Cologne.

It is renowned as a monument of Christianity, of German Catholicism in particular, of Gothic architecture and of the continuing faith and perseverance of the people of the city in which it stands. It is dedicated to Saint Peter and the Blessed Virgin Mary. The cathedral is a World Heritage Site, one of the best-known architectural monuments in Germany, and Cologne's most famous landmark, described by UNESCO as an "exceptional work of human creative genius". It is visited by 20 thousand people every day.

Construction of Cologne Cathedral began in 1248 and took, with interruptions, until 1880 to complete– a period of over 600 years. It is 144.5 meters long, 86.5 m wide and its towers are approximately 157 m tall. The cathedral is one of the world's largest churches and the largest Gothic church in Northern Europe.
Cologne