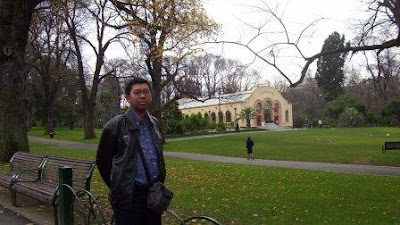 Qantas plane which I was traveling from Sydney, landed in Melbourne smoothly. We immediately picked up by a Travel Agent, not directly to the hotel, but around Melbourne first. One of them visited the Royal Botanic Gardens.

According to Wikipedia, The Royal Botanic Gardens Melbourne are internationally renowned botanical gardens located near the centre of Melbourne, Victoria, Australia, on the south bank of the Yarra River. They are 38 hectares of landscaped gardens consisting of a mix of native and non-native vegetation including over 10,000 individual species.

They are widely regarded as the finest botanical gardens in Australia, and among the best in the world. However, the gardens are also noted for their historical contribution to the introduction of invasive species.


The Royal Botanic Gardens Melbourne are adjacent to a larger group of parklands directly south-east of the city, between St. Kilda Road and the Yarra River known as the Domain Parklands, which includes;

If You will go to Melbourne, don't forget to visit Royal Botanic Garden.
Melbourne