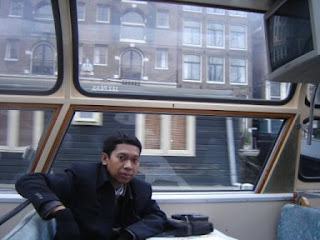 Although only two days in Amsterdam, we took along the Amstel River by boat. On the way down the river, we're listening to explanations about the history of the river and the buildings surrounding it.

According to Wikipedia, The Amstel is a river in the Netherlands which runs through the city of Amsterdam. The Amstel's name is derived from Aeme stelle, old Dutch for "area abounding with water".

The river originally began where two smaller rivers, the Drecht and Kromme Mijdrecht, joined together, a little south of Uithoorn. After the construction of a canal, the Amstel-Drecht Kanaal, the river (including the canal) now begins where the Drecht and another canal, the Aarkanaal, meet one another, near the town of Nieuwveen. Tributary rivers are the Kromme Mijdrecht, Bullewijk and Waver. 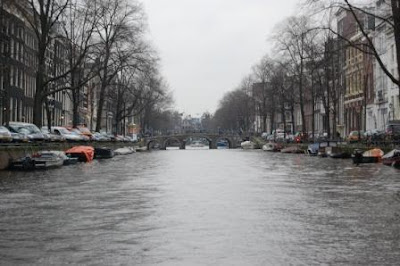 The river's mouth is in Amsterdam, where it meets the IJ bay. However, in 1936 the last part of the river (called Rokin) was filled in, so the river now ends at Muntplein, although it remains connected to the IJ through subterranean pipes.
Amsterdam