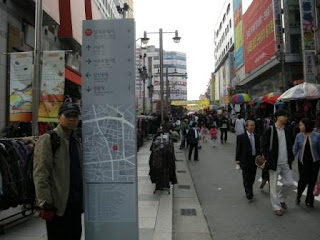 Before returning to Indonesia, I went to one of the traditional market in Seoul, the Namdaemun Market. The market is located next to Namdaemun, which means "Great South Gate," and was the main southern gate to the old city. The location of the market is within a 10 minute walk from Seoul metropolitan station and is even closer to the subway (Hoehyeon Station, Line 4).

According to Wikipedia, Namdaemun market is one of the oldest continually running markets in South Korea, and it is the largest retail market in Seoul. The streets in which the market is located were built in a time when cars were not prevalent, so the market itself is not accessible by car. The main methods of transporting goods into and out of the market are by motorcycle and hand-drawn cart.

It occupies many city blocks, which are blocked off from most car traffic due to the prevalence of parking congestion in the area. The market can be accessed by subway or bus. 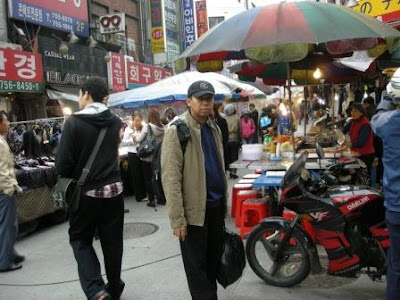 Much of the market is outside, but there are also many stores which line the streets. Many retailers buy their items, particularly clothing, at wholesale prices at Namdaemun, to resell in their own stores in other cities. Namdaemun is a popular tourist attraction, but most of the customers are Korean.
Seoul